While reading this blog, you may have wondered, "Where did the name 'Mindsilt' come from?"  Maybe.  Most likely you've never wondered at all because of the explanation under the title.  That little explanation is pretty much it, but you may not know that Mindsilt used to belong to another site.  Technically it still does.  It's my own site: www.mindsilt.com.  As you can see, it still exists and you can read a bunch of really old stuff that I used to post there before I started this blog.  I'm working on getting everything moved over and redirecting this blog to that URL.  However, I have to port some code from that site to the pH site before I can do that.  Not a real high priority.

Anyway, I decided to use the Wayback Machine to grab screen shots of the old Mindsilt sites so that I could walk you through the evolution of Mindsilt.  Fire up the flux capacitor - here we go. 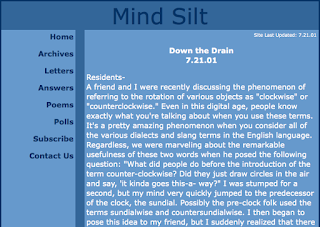 Breathtaking, no?  Looks like a rookie's attempt at creating a web page.  That's because that's exactly what it was.  I was going for the Commodore 64 look.  Good thing it was only a placeholder for a month. 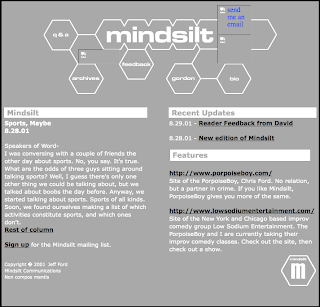 This was my "Hexagon Period."  I was quite obsessed with creating a design with hexagons for some reason.  I guess I thought it looked cool.  Or maybe I was just jonesing for some Honeycombs cereal.  Each one of those hexagons with the words inside would light up with a different color when you moused over them.  The associated page then used that color as an accent.  Of course, those broken images weren't there on the site or this wouldn't have lasted long, either.  Unfortunately, this was a pain in the ass to maintain because everything was its own static page, but it was a definite step up from the original design. 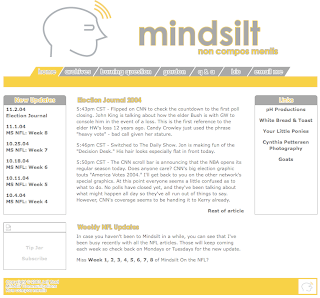 Looky there.  I've got my own logo.  I drew the logo myself, but didn't have the skills or software at the time to create it in digital form so I asked my friend Jason to make it for me.  He did.  Free of charge.  I still didn't manage to create a database to house the data for the site, but I cleaned up the design and made it a little more readable.  This one may be my favorite of all the designs and I'm still not sure why I didn't just convert it once I finally added the database backend, but I didn't.  I guess I thought it was time for a change.
Mindsilt - 1/2005-Now 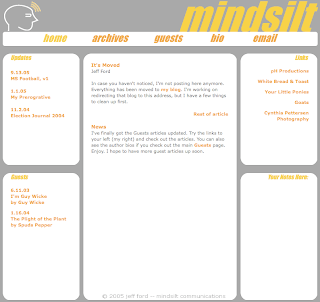 Guess what?  I like gray.  I've used gray in every single one of my designs that I spent any time on at all.  Not sure why I settled on yellow as the secondary color, but I know that I immediately ruled out red because I didn't want to be mistaken for an Ohio St. fan.  Not that you care.  If you clicked on the link above, you know that this is the current design of mindsilt.com.  It's the first - and only - iteration of the site with a backend data source so that the pages are created dynamically.  Of course, the site is basically defunct now because of this blog.  This blog will eventually be moved to mindsilt.com and the design above will go away.  That's probably for the best since it's pretty generic and boring.  In fact, the more that I look at it, the more I want to take it down.
That's it.  That's my little trip down Mindsilt Lane.  I hope you enjoyed it as much as I did.
Posted by Unknown at 8:09 PM

Email ThisBlogThis!Share to TwitterShare to FacebookShare to Pinterest
Labels: mindsilt