Some random things from my life and brain:

Crazy Day at the Gym
A few weeks ago I walked into the gym to the familiar stench of Icy Hot.  I knew immediately that Twinkletoes was working out.  Twinkletoes is a pornfully mustachioed fellow who runs on the treadmill on this tiptoes and tries to mask his horrible BO stench (he doesn't wash his clothes) by wearing Icy Hot.  Lots of it.  Enough that it makes the whole gym smell like Icy Hot.  Delightful.

I made my way into the locker room to change into my gear.  As I'm changing, I notice that the Indian fellow who runs the convenience store in our building comes in.  I continue to change and head over to the bathroom area of the locker room.  I notice that there are a pair of shoes sitting outside one of the bathroom stalls.  Then I hear a cellphone ring from inside the stall.  Suddenly, Mr. Convenience Store is yammering away on his cellphone while sitting in the stall.  Wait a second.  He's not sitting in the stall.  I can see no feet below the stall door.  He's squatting on the toilet.  Splash.  Splash.  Splash-splash.  He's got to be getting wet.  Time for me to go.

I plugged in my headphones and began my workout.  Everything was going well until I stepped off of the treadmill and headed over to the weight area.  It was then that I noticed a dude wearing khaki pants and dress shoes doing free weight shoulder presses.  Did I mention that he wasn't wearing a shirt?  No?  Well, he wasn't wearing a shirt.  What the fuck is going on?  Why is everyone in my gym crazy?

Since that day, things have been more normal, but not by much.


The Artist Formerly Known as Chad Johnson
Chad Johnson, the star wide receiver for the Cincinnati Bengals, has changed his name to Chad Javon Ocho Cinco.  If you are not aware, Johnson wears number 85 for the Bengals and last season he came out with "Ocho Cinco" on his jersey.  You can see this in the photo below. 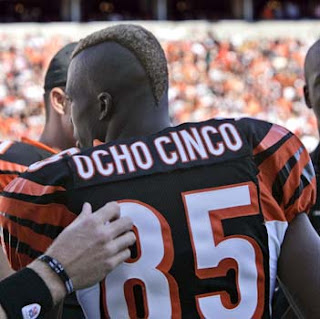 It turned out that it was simply a velcro strip that was placed over his actual nameplate.  However, now that he has changed his name to Ocho Cinco (which isn't even the correct Spanish for 85) he will be able to wear "Ocho Cinco" on his jersey.  I'm sure he thinks he's being original, but there are other, more famous athletes who have changed their names.  Remember how Muhammad Ali used to be Cassius Clay?  And remember how Kareem Abdul-Jabbar used to be Lew Alcindor?  Yeah, not original, Chad.  If that is your real name.

I think the Bengals should change his number just to mess with him.

Usher
I read that Usher is planning a new tour where he will play smaller "more intimate" venues for ladies only.  I can only assume that this will be to promote STDs - or rather his new album "Poon Hound."  By the time that tour is over you will be no more than six sexual degrees from sleeping with Usher.  I guarantee you that the rest of the Hip-Hop world is kicking themselves for not thinking of this first.

U.S. Open
Dee and I have been watching the U.S. Open nearly every night since it started.  We love us some tennis.  A few observations:
My Wife
I have a hot wife.
Posted by Unknown at 1:50 PM