It's the end of the year, so it's time to see how I did on my goals.  This determines my worth as a human being.  Can you feel the tension?

1) Write every day
Technically, I failed at this one on January 19th when I didn't write anything.  I didn't completely give up after January 19th.  I fought on and ended up writing on 323 of 366 days in 2008.  Thats 88.3%.  I was only able to write every single day of two months: August and December.  That strong finish was part of a 55 day streak where I made a lot of progress on a number of projects.

This was a challenging goal, but I feel like I did pretty well.  I learned a lot about writing and how frustrating it can be when you've got a block.  I also learned that trying to force yourself to write every day often winds up with you writing a bunch of crap or struggling to get something down just because you're trying to reach a goal.  That's why I won't have this goal for myself next year.  I'll have more specific goals for my writing projects.

2) Organize my iTunes
At my last check in on August 6th, I had 31 playlists in iTunes and had begun rating all of the songs in my library.  Now, I've finished rating my songs and I've created 44 more playlists, bringing me to 75.  I'd call this one complete.  I've got my iTunes set up so that I can quickly create new playlists and constantly keep fresh music rotating through my iPhone.  I've actually become a bit of an iTunes ninja in the process.

I won't need to continue this goal in 2009 as I've already got everything organized and it will just be a matter of maintaining everything as I add new music.  Good job, me.

3) Re-do second bedroom
As I mentioned before, DONE!

4) Write and direct a sketch show
Well, shit.  My streak of goal completion comes to an end at two.  I've written quite a few sketches, but not enough to make into a full show.  Not to mention that they don't really have a theme.  I lost my way on this one.  I'm going to refocus on other writing projects in 2009.

5) Take a writing class
No excuse here.  I just didn't sign up.  Failure.

7) Organize my hard drive
Since the last update I've been continuing to keep my files in order and Evernote and Scrivener have been a major part of keeping my various notes and drafts organized.  I would definitely call this one a success.

8) Continue to get my finances in order
Dee and I have done a very good job of finding ways to manage and track our spending.  Since I last wrote, we've also been doing a better job of saving money where we can.  We can always do better, but we're better than we were.

Take a deep breath, everyone.  My human worth is about 62.5%.  That would earn me millions of dollars as an NFL quarterback but I'm merely a project manager.  Fortunately, the three goals I didn't accomplish in 2008 are still relevant for 2009 and I plan to keep them on and complete them.

Email ThisBlogThis!Share to TwitterShare to FacebookShare to Pinterest
Labels: goals

On Getting a Dog

Sometimes your life spins completely out of control and there is nothing you can do to stop it.  You just have to go along for the ride.

On a particularly busy Thursday - December 11th to be exact - I returned to my desk from a series of meetings to find that I had two voice mails.  One on my cell phone and one on my work phone.  They were both from my wife.  I could only assume that there was some kind of major emergency.  I decided to listen to both of the voice mail messages before calling her back.  The first was brief: "Give me a call when you get this."  The second was a bit longer and described her situation.  She was currently at a dog shelter near her office and she was walking an "adorable" wiener dog that she was sure would be adopted soon.  She had fallen in love and didn't want to lose her.  What should she do?

I took a deep breath and dialed the phone.

As I drove home Dee held Ruthie (yes, that's her name) on her lap in the passenger seat.  We made a stop at Petsmart to pick up the essential dog items and everyone laughed and cooed over Ruthie.  It helped that she was wearing a little coat that made her look like a ladybug.  It also helped that she's pretty cute.  See? 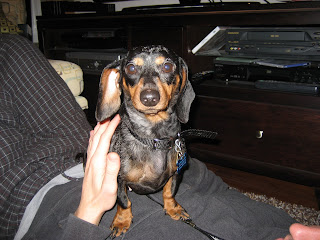 Eventually, we got her home.  We gave her a tour of the place and introduced her to all of her new toys.  She wasn't really interested.  All she wanted was to curl up in our laps.  Dee happily obliged.  I was less willing but eventually came around.

Thankfully, Ruthie - who is about four years old - was already trained so the accidents have been kept to a minimum.  Unfortunately, she has severe separation anxiety and is constantly looking for attention.  Plus, she completely freaks out when we leave.

That's the ride I'm on now.  At least I still have my marriage.
Posted by Unknown at 2:47 PM 4 comments:

Have you been digging the shit out of Hamster on a Piano? You don't have to answer. I know you have been. That's one badass hamster with his very own theme song.

You want to see another video that's pretty cool, but not cool in the same way? You don't have to answer. I know you do.

Pretty cool, huh? I guess Philly fans aren't that bad after all. They didn't throw a single battery at that kid.

Doods, I finally signed up for Facebook! Awesome! I've already super-poked your mom.

If you get sick and tired of these long-winded blog posts, you can catch the abbreviated version of me on Twitter. That's right. I've signed up for Twitter. All the kids are calling it "micro-blogging." I call it "stalking Jon Hodgman." Find me at twitter.com/jdford. Sign up and we can follow each other. It's more fun with friends.

Have you heard that song "Paper Planes" by M.I.A.? It's fucking terrible. I'm pretty sure it's the worst song ever written. Sweet Christ, it's bad.

I'm a paranoid dude. For example, I received a large, white envelope in the mail on Friday. The only marking on the envelope was my address and a return address without a name. I immediately assumed that it was some sort of bomb or other harmful device so I took it outside and found a place where the least amount of harm would be done. Turns out it was just my quarterly McSweeney's delivery.


Who's that adorable little girl? 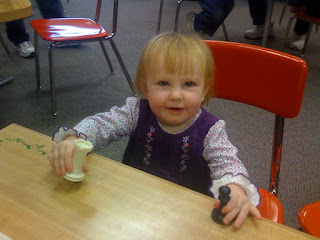 That's Courtney. She's my new bestest buddy - especially after I helped her at the dessert table on Thanksgiving.

I went Christmas shopping with my wife on Sunday. There were some seriously big sales happening. Thanks, recession.

The Irish are going to the Hawaii Bowl. They will be playing, wait for it... Hawaii. I'm not sure they can win.

Ray Lewis is one badass mofo.

It's hard NOT to get excited about the 7-13 Indiana Pacers right now. I mean, they've got dynamic players like Jeff Foster. Wow. Just, wow.

Why are parents so lazy? Seriously. They need to grow the fuck up. I was reading this article and was incensed by this paragraph:

"Now the app has been pulled from the App Store by Majewski after a new fiasco -- last Friday's episode of Santa Live 2008 featured the ever-popular holiday song "Grandma Got Run Over By a Reindeer" (click opens iTunes). Apparently some parents became irate, concerned that they were going to have to explain (emphasis added) to their little ones why grandma was killed by renegade horned ungulants."

God forbid that parents have to explain things to their child. You know, it would suck if they actually had to DO THEIR JOB and education their children about the realities of the world. This is a ridiculous example, of course, but the logic carries for things like video games, TV and movies.

Prop 8 - The Musical - definitely worth a watch.

I'm a paranoid dude, part II. When I fill out forms to be submitted to the government or other such organization, I fill out the entire document EXCEPT for the signature line so that when I make a copy of the document my signature isn't stored in the memory of the copy machine.

Have a good weekend. The next time you read this I may have a dog.
Posted by Unknown at 3:47 PM No comments:

Hamster on a Piano

Because my readers deserve something this fucking awesome:

Posted by Unknown at 7:41 PM No comments:

So You Want to Work Out?

Recently, I've had a couple different people ask for my advice on working out.  I think they were probably looking for specifics on the type of exercise I do, but I gave them something completely different.  Because that's what I do.  I drive people crazy.

Keep in mind that most of the advice below is targeted at people who are just starting to work out...

Keep pushing yourself.  If you haven't worked out for a long time (or ever) you'll get tired pretty quickly, but once you get into the routine things will start getting easier.  If you want to keep making progress, keep cranking up the intensity.  If you're lifting weights, do more reps or add more weight.  If you're doing cardio, crank up the speed, resistance or time you're on the machine.  If you wear yourself out too quickly you can always ease off, but if you don't go hard enough you'll plateau.

Change it up.  This is related to keep pushing yourself.  If you don't change things up, you'll get into a rut and plateau.  Your body will adjust to the activity levels and you won't make any progress.  There are plenty of sites on the Internet that provide all kinds of different exercises and training tips - I'll let you go find those.  Use them.  Try something different and new.

Don't let other people intimidate you.  Everyone has different goals and different fitness levels.  What's right for you is not right for someone else.  Don't let the overpumped dudes who are lifting a ton of weight make you feel weak.  Everyone has to start somewhere and you have to start at the place that is best for you.  Don't be ashamed.  Eventually, you'll get to a point where you're lifting heavier weight or running at a faster pace, but it won't happen overnight.  Don't let that get you down.

Be respectful.  I've already ranted a number of times about this.  Wipe off your machines after you use them.  Wear shoes and socks.  Wash your gym clothes after each workout.  Don't hog the machines.  The list goes on and on.  In general, just be considerate of the other people there that are trying to get a workout and you'll be fine.

Be patient.  Seeing results takes time.  Your weight loss and muscle gain won't be like the folks on The Biggest Loser who get to focus completely on working out.  Your body will change more gradually, but it will change.  Over time you'll see the bulges moving from the wrong places to the right places but that only comes from consistent hard work.

Of course, there are a thousand other things that I could mention like changing your eating habits, but that's a completely different topic.  However, I have a feeling that once you start working out, you'll want to change your eating habits.  I wanted to, and I did.

Hopefully, some of you find this helpful.  Though I've probably driven most of you crazy.  That's what I do, remember?
Posted by Unknown at 11:30 AM No comments: