Review: Dancing With the Stars Week 6

I spend a lot of time being disappointed in America.  This is not one of those times.  After my pleading and begging (and warnings) America finally came through and sent Kate Gosselin home.  I thank you, America, but mostly I thank me for telling you what to do.

Someone in the Dancing With the Stars’ Department of Cheese took the night off because there isn’t a theme to this week’s show.  It’s simply Samba and Argentine Tango week.  They are also adding a Swing Dancing Marathon at the end because there aren’t enough dancers to fill a whole 90 minutes.  There aren’t enough synonyms for hate.


This week's hot gossip: Buzz Aldrin is the next Bachelor.

Jake Pavelka
Jake’s partner took him to meet some “Samba dancers” who looked a lot like Vegas showgirls.  We never saw them actually dance, but they shook their butts which were adorned with feathers.  This lead to Jake making a predictable “shake your tail feathers” joke.  Is he the least self-aware person in the world?  Judging by the fact that the routine was so hard that he said, “Gol-LEE” I think there’s no doubt that he is.

Evan Lysacek
There’s nothing quite like watching a tiny Russian girl try to get “street” on a male figure skater.  It didn’t feel like the producers egged them on at all.  During rehearsal, Evan smashed his head on the floor and went to the hospital to get checked for a concussion.  It turns out that his doctor was an improviser doing a bad German accent, or it was the most stereotypical German doctor ever.  At the end I expected him to say, “And now I vill take over zee vorld!”

Brave, brave Evan soldiered on and danced his Samba like a gay man who doesn’t know how to be straight.  Between Evan and Jake, it seems that dancing the Samba involves completely losing the beat coupled with Ballet.  His sexy redhead partner couldn’t even save the day now that she’s over-colored her hair.  Did I just write that?  Who’s gay now?

My score: Can we get the doctor as a contestant next year?

Niecy Nash
Each week, Niecy provides the only watchable portion of the show — her lead in.  She’s fun, funny and has great chemistry with her partner.  I’m going to push my luck and ask you, America, to keep her on this show.  Vote for this woman.  If you don’t vote for her, I’ll go back to being disappointed in my country.  Nobody wants that.  Especially you, America.

My score: C is for cookie, that’s good enough for me.

Erin Andrews
I liked Erin Andrews better when she was a smart sideline reporter that asked good questions.  The more I see her in the lead-in, the less I think of her.  She’s whiny and makes excuses when things get hard.  Plus, her partner is a really big fan of himself.  Really big.  Marry his love hand, big.

I like Erin Andrews better now that she’s decided to dress in skimpy outfits and writhe and shimmy around the dance floor.  The more I see her in less clothing, the more I think of her.  She’s sexy and I have to make excuses when things get hard.  Plus, her partner is really big with the ladies and the gays.  Love hands across America are getting a workout, big.

My score: Jekyll and Hyde.

Chad Ochocinco
Chad went to Cincinnati to see his fans before rehearsal because he needed some inspiration and we needed to see an overweight football fan give us his opinions on ballroom dancing. 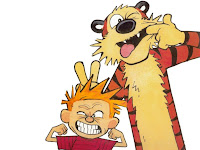 Okay, I’m confused.  In the past weeks, the judges were docking points left and right for doing lifts.  Suddenly, everyone can do lifts.  The rules to this dance show are more confusing than football rules.  They might as well be playing Calvinball out there.  Oooh, I just had a fantastic idea.  Since Chad plays for the Bengals, they need to dress him up like Hobbes and his partner like Calvin.  Remember Calvin and Hobbes?  They were awesome.

My score: ADD is a gift.

Nicole Scherzinger
Man, hot girls are whiny.  Or maybe Nicole is a mad genius.  Maybe she’s playing up the drama during rehearsal so that when she comes out and kills it on the dance floor we’re all impressed.  She’s probably just a whiny hot girl.

Early in the routine there was a closeup on her bare midsection.  Then I blacked out.  When I came to, she was whipping herself around the dance floor and sex was flying everywhere.  Everyone loved it except for the old British judge who we’ll call Statler… no, Waldorf.  I feel light-headed; I need a cookie.

Pamela Anderson
Pamela landed in the bottom two last week which proves that America doesn’t love sluts the way they used to.  Remember the days when America loved sluts?  No?  Was that just me?  Anyway, she was determined not to end up in the bottom two again.  Ho-hum.

Pamela Anderson is perfectly sexy.  She’s so sexy that it’s not even arousing.  Her natural state is sexy so when she tries to act sexy it just seems like more Pamela.  It’s strange and it makes me wish I was Chuck Klosterman so that I could properly explain it.

My score: I’m failing you terribly.

The Swing Dance Marathon
The Swing Dance Marathon involves all couples dancing Swing on the floor at the same time.  Everyone is allowed to do lifts and throws and the judges eliminate the couples one by one until there is only one couple standing.  The last couple standing gets 10 points, the next to last gets 9 points and so on.  The points don’t really count for anything but they insist on giving them anyway.

Packing a dance floor full of swing dancing amateurs may seem like a good idea when you are at a high school lock-in but it doesn’t work on TV.  It was like watching a NASCAR race; I was hoping for a crash.  Unfortunately, I was disappointed.  All of the dancers made it through without major physical injury.  The dancers were eliminated in the following order:

1) Jake Pavelka — See?  I’m not the only one who can’t stand this guy for more than a few seconds.
2) Niecy — Too much jiggle for the swing.
3) Evan — He’s not the kind of figure skater that lifts other figure skaters.
4) Chad — He’s used to catching, not throwing.
5) Pamela — This is not the type of swinging she’s used to.
6) Erin — Good showing, but not good enough.  At least we didn’t have to hear her whine.
7) Nicole — Winner!  What do you expect?  She’s the ringer.

My score: Just end the damn show.  We don’t need this crappy filler.
Posted by Unknown at 7:00 AM