Dancing With the Stars Premiere - A Review

I had forgotten about the awful the Dancing With the Stars band.  I had completely erased them from my brain.  Now they’re back in my life with their terrible covers, overplayed trumpets and strange headbands.  Why do I do this to myself?

This year, they’ve given each star a nickname because no one recognizes their actual names.  Call me Jeff “Glutton for Punishment” Ford.

Audrina “The Hills Hottie” Patridge
I have no idea who this girl is, so I Googled her.  By the way, don’t Google Audrina if you’re at work.  She’s definitely not safe for work.  She’s also not safe for entertainment because she has no personality.  At one point her pro, Tony, tries to get her pumped up by asking her, “Whose floor is this?”  She responds by asking, “Ours?”  It’s the Dancing With the Stars version of “We must protect this house!”

They make her dance to "California Gurls."  Is anyone surprised?  Audrina is supposed to be the eye candy for this season.  Unfortunately, she doesn’t do it for me. 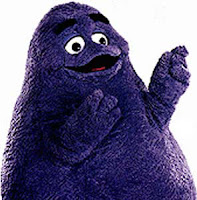 My score: My popsicle is not melting.

Kurt “The Superbowl Success Story” Warner
Kurt is a Super Bowl champion and legendary whipped husband.  I really wish his wife still had her bad flattop haircut.  The dude has seven kids and they’re all by the same wife.  That’s gotta be an NFL record.

Remember Kurt’s interviews after his football games where he would just smile blankly and thank God?  That’s exactly what he looked like the whole time he was dancing.  It didn’t help that they dressed him like Grimace.

My score: Next week, Hamburgler.

Kyle “Disney Channel Dynamo” Massey
Who?  I guess he used to be some kind of Disney Channel star.  Doesn’t he know that this show’s demographic is sixty-year old women?  His Disney Channel fans are all in bed.  Or watching something on the Disney Channel.  However, it seems like he could have a great career playing Forest Whitaker as a child.

Rick “Basketball’s Foxiest Champion” Fox
They always assign Cheryl Burke the hot athlete.  It’s like they’re trying to fix her up every season.  Haven’t they figured out that hot athletes aren’t her type?

Aerosmith?  Really?  This cheesy band is going to cover "Crazy"?  Welcome to your 1994 high school prom with worse music.  Of course, this is the moment the judges choose to laud the band.  Is he dating the girl from Dollhouse?  They keep showing her and they should continue to do so.

Margaret “Comedy’s Most Outrageous” Cho
This year’s comedian.  It’s good to see she’s still doing a bad Asian accent.  Her only chance to stick around is to make the viewing audience like her.  Much like Niecy last year.

Why are they dancing to "We are the Champions"?  Who dances to this ever?  Wait a tick.  She can dance.  Margaret Cho can dance.  She looks like she’s crapping her pants while she’s doing it but she can dance.  Good for her.  She took the snark right out of my snark flute.

My score: Did anyone else think she was dead before she appeared on this show?

Brandy “R&B’s Platinum Girl”
I know her.  I recognize her at least.  I’m not exactly sure why she’s a star but I’m pretty sure I’ve seen her on television before.  At first I thought she was Raven from That’s So Raven or maybe Martin Lawrence’s girlfriend on Martin.  Based on her nickname, she must be some kind of pop star and therefore this year’s ringer.  Can we pencil her in for the finals?

Can anyone name one of her songs?  Anyone?  Bueller?  Bueller?

My score: Madonna you’re not.  Get a last name.

Bristol “Alaska’s Most Famous Daughter” Palin
Bristol opens her lead-in by saying, “I’m a public advocate for teen pregnancy prevention.”  She’s great at her job.  No teen is going to want to have sex after seeing her dance.  I don’t think it’s a coincidence that the judges score her 6-6-6.

My score: The devil is awkward.

My score: What man allows himself to be called Corky?

Michael “The Balladeer” Bolton
He’s determined to show us all that “he can do this.”  You know, because everyone doubts Michael Bolton when they aren’t busy completely forgetting about his existence.  I liked him better when he had a mullet.  By the way, are we sure that he’s not also Kenny G?  Have they ever been in the same room together?

Mike “The Situation” Sorrentino
Casting The Situation on this show doesn’t make any sense.  He can only be less interesting when he’s sober.  Plus, he’s a terrible dancer.  The Situation mumbled something to one of the judges and the old judge fired back, “Did I tell you you’ve got the guns but not the ammunition?”

Did I tell you I’m a doctor but I’ve got no patience?

My score: The Unfortunate Situation

Jennifer “The Original Dirty Dancer” Grey
They make her dance to a song from “Dirty Dancing” so that she can cry about Patrick Swazye.  How does she get to be on this show?  She learned how to dance for “Dirty Dancing.”  Are they that afraid that none of these stars will actually learn how to dance?

My score: Can we start this Jennifer Grey and Jamie Lee Curtis rumor?

David “The Hoff” Hasselhoff
The perfect fit for this show.  He doesn’t know that cheesy exists.  This show doesn’t know that cheesy exists.  Case in point: He and his partner danced to “Sex Bomb.”  By the way, his partner is a sex bomb.  Unfortunately, he can’t dance at all.  Not one bit.  I can’t wait until they trot him out in red swim trunks and he dances to a Beach Boys song.

By the way, Brooke Burke is the worst co-host of all time.  It’s not even close.

My score: We’re all waiting for him to show up drunk, right?