The Bachelor Premiere -- A Review 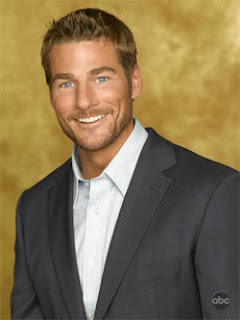 Let me get this straight.  The Bachelor has decided to bring back the most reviled bachelor in the show’s history to give him another shot at finding someone to propose to and break up with a few weeks later?  The Bachelor is now full-on making fun of its viewers.  The only way this would be more of a joke is if they brought back one of the bachelors that broke up with his chosen girl.
If you love this show you are an idiot.
Brad Womack is back after three years.  I guess that he decided not to choose a girl at the end of his original season and people hated him for it.  What?  You mean he was actually smart enough to realize that a TV show wasn’t the place to find a wife?  God forbid.  Despite the fact that he made the right decision three years ago, they beat us over the head with the fact that he’s spent the entire time in therapy so that we all know he’s a changed man.  Maybe this time he’ll be smart enough to send everyone home after three weeks.
They couldn’t resist bringing back the two girls he turned down on the last episode of his original season.  What about the other 23 girls he rejected on that show?  Why don’t they get their due?  They both attack him and tell him that the girls on the show won’t want to be with someone who hurt them like that.  Really?  Is there anyone on Earth that hasn’t hurt someone?  Is there an IQ test you have take and fail to be on this show?  Why do I continue to be surprised by people’s stupidity?
Introducing the Bachelorettes
With the exception of about two girls, all of the bachelorettes immediately know who he is.  The first girl out of the limo smacks him in the face “from every woman in America” and he thanks her for it.  Instead of having normal introductory conversations with these girls, he basically begs every last one of them to give him a chance.  It’s sad and pathetic.  A few highlights:
That’s just a sampling of the thirty women.  Sweet Christ, thirty!  This show is going to run through July.
The Cocktail Party
I guess three years of ridicule from dim-witted Bachelor fans completely melts your spine.  Before the cocktail party gets started, he tells all of the girls about his original season and asks anyone if they want to leave.  No one leaves.  This doesn’t stop them from spending the entire party voicing their concern about Brad’s inability to commit.  They all want to know that he will be able make a decision.  Guess what?  He did make a decision.
This dude needs to stop apologizing and just move the fuck on.
I can’t believe that Ashley S. is the only girl who is smart enough to forgive the guy and tell him that she just wants to move forward.  Actually, I can.  She’s a lock for the first impression rose because she’s the only one who’s been nice to him.
Renée gets a moment with Brad and uses it to tell him, “I have a great sense of humor.  See?  I’m not wearing any shoes!”  Another girl immediately steps in and saves Brad from this awkwardness which leads to a fun little exchange where Renée keeps trying to steal him back only to be trumped by someone else.  First of all, take a hint, sister.  Second, Brad needs to man up and tell the other girls to wait while he finished being bored to death by Renée.
Madison’s — the girl with fangs — mysterious and sexy thing seems like an act and when Brad calls her on it she pretty much drops it but we never figure out if the fangs are real or not.  They’ve got to save something for next week.
Eventually Chris Harrison brings out the first impression rose but Brad is not gutsy enough to make the joke that he just can’t decide who to give it to.  He gives it to Ashley S. as I predicted.
The Rose Ceremony
Brad has to hand out 19 more roses to a bunch of girls that we hardly know.  It’s always the least interesting rose ceremony of them all.  Everyone just wants it to be over.  I sure did.  I’m pretty sure he picked the girl with the fangs and the funeral director but he also may have sacked Tyrod Taylor in the Orange Bowl.  I wasn’t paying much attention at this point.
My roses go to:

Email ThisBlogThis!Share to TwitterShare to FacebookShare to Pinterest
Labels: The Bachelor.