An Open Letter to AT&T 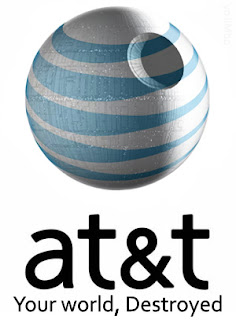 I know that you are used to having open letters written to you.  Typically, they are about how you are screwing up the iPhone or iPad.  This is not one of those letters.  This letter is about how you are screwing up your DSL Internet service.
I’ve been an AT&T DSL customer for over eight years.  Until last Thursday, your service had worked just fine.  On Thursday, April 14, 2011 your DSL service stopped working without notice.  I believe the technical term for this is “shit the bed.”  Your service shit the bed.  At first I thought this was just some small issue with the modem or possibly my computer, so I restarted them both.  Everyone that has ever dealt with technology knows by now that the first step is to restart everything.  That did not solve the problem.  I happen to be fairly tech-savvy, so I did a few other troubleshooting steps but they did not solve the problem, either.
That’s when I decided to call your technical support line. (Insert ominous music here.)
The first person I talked to started to tell me to restart everything and when I told her that I had already done so, she passed me along to the Level Two Support.  A cheerful Indian woman named Monique answered the phone and asked me how she could help me.  Let’s pause and address the issues I have with this one simple action:
1) This woman is Indian and her accent is thick and noticeable and yet she calls herself “Monique.”  I have no problem with the fact that she is Indian or in India.  I understand that many companies outsource their technical support.  However, don’t make her call herself “Monique.”  Don’t try to fool me in to thinking that she’s sitting somewhere in Alabama trying to solve my problems.  I’m not an idiot, don’t treat me like one.  Let her use her real name and let’s drop the charade.
1a) Also, why would I trust anyone who is obviously giving me a fake name?

1aa) I never trust anyone named John Smith.
2) She asked me how she could help me.  I had already explained my issue to the previous tech.  I shouldn’t have to explain it again.  Thanks to computers and the Internet (which I didn’t have at my disposal at that moment) we can transmit data over long distances in very little time.  The new tech should be familiar with my issue before she answers my call.  Hell, I’d even be willing to wait while she read up on the issue.  Instead, I had to start all over from the beginning.
“Monique” promptly asked me for a callback number in case we happened to get disconnected.  I gave her my number.  She confirmed it.  After a bit of troubleshooting she had still not solved the problem and she was clearly grasping at straws.  I was about to suggest that she pass me on to Level Three Support when my call dropped.  I waited for five minutes for her to call back.  She did not call me back.  I had spent over 45 minutes on the call with your support team and I really, really didn’t want to start all over a third time.  It seemed I had no choice.
I dialed your technical support line again.  I admit, that one is on me.  I’m a glutton for punishment.  I quickly explained my issue and my situation and was passed along to Level Two Support again.  It was a new Indian fellow named “Tom.”  I had to explain everything to him again.  He was of no help.  Once he finally realized that he was not helping, he offered to pass me on to Level Three Support for a small fee of $49.95.  Again, let’s pause:
1) Your service shits the bed (technical term) and you want to charge me so you can try to fix it?  I asked “Tom” if my $49.95 comes with a guarantee that AT&T will resolve the issue.  He then read me a disclaimer that stated the exact opposite.  AT&T would NOT guarantee that this service would result in a solution.  I declined.
1a) I know I just used a lot of italics, but I’m trying to make a point, here.
2) Tom?  Really?  He’s not even trying.  At least Monique sounds a little exotic.  Tom is just openly mocking me at this point.
2a) At one point I told “Tom” that he could call me “Ramit.”
As I discussed the merits of paying AT&T to fix one of your very own broken DSL lines, my phone dropped the call.  At this point, I gave up and went to dinner with three people whose names I actually knew.  I drank several beers.  I think you might understand why.
On Friday, I decided to give it one more shot.  This time, I started from the beginning and I had a stilted, yet interesting conversation with your automated voice system.  In fact, your automated voice — who I can only assume is named Ravi — ran some tests and informed me that he discovered a problem with my line.  Pause:
1) Five different humans could not discover the problem with my line.
2) Your computerized voice discovered the problem within two minutes.
3) I was the only living witness to this bit of information.
When I was finally connected to a human with a memory, she could not confirm the issue with the line before the call was dropped.  Once again, she did not call back.
I had things to do on Saturday so I did not delve into your Escher-esque phone support system.  However, I did realize that simply finding a new provider was the best way to both solve my issue and avoid your impossible maze of phone support.
I was right.  I talked to a friendly fellow at RCN named Chris (and I believe that is his real name) and he got me set up for faster, cheaper Internet the very next day.  One call, one person, one answer.  Delightful.
Happily Internetting Again (With No Help From You),
Jeff Ford
****
Posted by Unknown at 7:00 AM