Weekend Football Thoughts and Other Things

The most frustrating Notre Dame football season of my lifetime ended last week with a loss in the Champs Sports Bowl versus Florida State.  The game perfectly encapsulated the season for the Irish.  To be nice, they’re still a young team learning how to win.  To be not so nice, they’re a bunch of bumbling idiots who can’t get out of their own way.  Strangely, I’m still hopeful for next season.

As the Colts game started, I tweeted, “Am I rooting for a #Colts win today? I haven’t decided.”  I quickly realized that I was rooting for a Colts victory even though I knew it would cost them the #1 draft pick.  If there was ever an example of “how I roll” that is the best case.

Sadly, the Colts lost again and they will have the #1 pick in the draft.  Now we get to hear about Andrew Luck and Peyton Manning for the next five months. 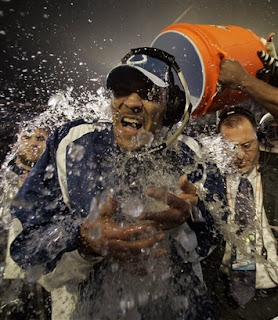 The Colts may have the top pick in the draft, but the Bears have a chance to really become a scary team with a couple of good draft picks.

I’m assuming that Urlacher’s knee is not completely destroyed.

If you think eating a single serving lasagna is depressing when you are single, try eating one when you’re married.

Matt Flynn made himself a ton of money yesterday.

Bengals at Texans and Lions at Saints on Saturday.  Falcons at Giants and Steelers at Broncos on Sunday.  Does anyone even want to watch the AFC games?

NBC is deliberately making television shows that will get cancelled after five episodes, right?  Smash feels like a bad first draft of the already terrible Glee.

Just one time I want to see a coach suit up in full rain gear for the last few minutes of the fourth quarter of a big game and then taunt his players to try to drench him with ice cold Gatorade.
****
Posted by Unknown at 7:00 AM